Normani was forced to reckon with universal beauty standards, ones that didn’t often include Black women like her, from a young age. Starting in elementary school, where she was only one of three Black students, she would study the rich, deep tone of her skin and the kinks and thickness of her hair in the mirror. These are the same qualities classmates cruelly mocked and the ones Normani would wish away in front of the mirror, hoping for a transformation that wouldn’t make her feel like the “other.” “I remember asking my mom to straighten my hair because I became very exhausted, having to explain why my hair appeared so different from theirs,” she tells ELLE.com. “I often wondered what life would’ve been like if my skin were lighter.”

Now, instead of following beauty norms, Normani is helping define them.

Normani is joining Urban Decay as the brand’s newest UD Global Citizen. The singer joins Urban Decay’s new class of Global Citizens alongside Riverdale star Camila Mendes and Hong Kong singer G.E.M for the brand’s Pretty Different campaign, which celebrates these women for their individuality and unapologetic nature, and pushing boundaries in their respective fields. Each UD Global Citizen will support the brand’s launches, including the newest iteration of Urban Decay’s Naked series, the Ultraviolet Eyeshadow Palette.

Normani has always been hyper-aware of her racial identity. Beyond being one of the only Black students in school where her Blackness was excessively mocked and nitpicked, she later became the only Black woman in pop group Fifth Harmony and had to yet again sit with that feeling of otherness as she was relegated to background vocals and the target of bullies online that dissolved the self-esteem she spent years building.

These days, the familiarity of otherness returns in a different form as the Black community is forced to mourn the untimely deaths of Black men and women each day, and intensify their fight for racial equality as well as diversity and inclusion in various industries—including beauty.

So, when Normani was presented with the opportunity to star in her first-ever beauty campaign, it had to be for a brand whose mission and beliefs were an extension of her own and views diversity as more than just the buzzword du jour. “I had to build a personal relationship [with beauty] and find my own sense of self. I was very fortunate to be raised by strong Black women that reminded me that I was also the standard of beauty,” she adds.

A longtime fan of the brand, Normani says Urban Decay has always “trail-blazed and challenged the industry’s definition of beauty since the beginning, working against the grain by celebrating differences and standing with marginalized groups by showing that makeup should be and can be inclusive for everyone.” Just last year, Urban Decay tapped stars like Lizzo, Ezra Miller, Joey King, Karol G, and CL as ambassadors, a move that celebrated all forms of beauty and furthered the idea that beauty is not monolithic. If Urban Decay does one thing, it’s backing up its mission with action, Normani says. “I am grateful to have partners that support getting louder and bolder to implement real change,” she adds.

When it comes to the Naked palettes, Urban Decay devotees know what to expect: 12 shadow pots in an impressive array of colors crafted in dreamy finishes from matte to satin to shimmer. Since its inception, the Urban Decay’s Naked has always favored neutral, bronze-hued tones until it toyed with pink shades in 2018 with the release of the Naked Cherry. This time around, Urban Decay is dipping into the color pool a bit more with the Ultraviolet palette, loaded with vivid purples, peach tones, and browns that are brighter and bolder than before. 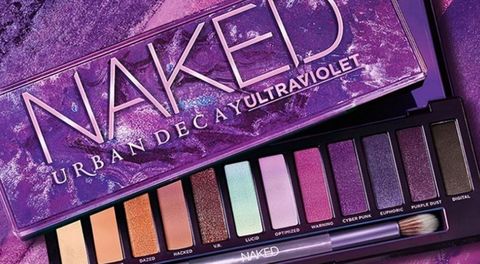 “The NAKED Ultraviolet serves nostalgia in a palette that I feel was created just for me,” she adds. Reminiscent of the 90s, Normani says she gravitates towards hues of blue and purple, which are especially flattering for deeper tones. But as much as this partnership is about beauty, Normani hopes to inspire change internally and externally, as this team-up provides her with another platform to spark dialogue about how the beauty industry can improve its lack of Black representation.

“I want to amplify black stories to help dismantle systemic racism. I wholeheartedly believe that through this collaboration, I have a real opportunity and obligation to the black community not only to lift my voice but all of theirs through this mission and journey to have more representation and justice inside and out of the beauty industry. Normani’s plan includes everything from providing resources and spotlighting black-owned businesses and leaders on Urban Decay social channels to sharing my perspective on beauty as a contributing editor to Urban Decay’s new digital magazine,” she says.

Initiatives like Sharon Cuter’s—founder of Uoma Beauty—Pull Up or Shut Up and Aurora James’ 15 Percent Pledge have inspired a wave of brand transparency on social media. But while brands have a lot of work to do and are quickly understanding lip service won’t suffice, its the start of what one can hope is a long-term transformative movement—one Normani is committed to being a part of.